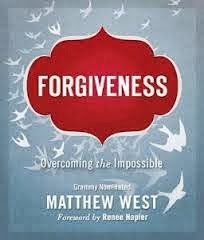 Dove-Award Winning Christian artist Matthew West has written a wonderful called Forgiveness. This book is based on his hit song by the same name (which is currently nominated for Dove Song of the Year).

West invited his fans to submit stories to him for inspiration in his song writing, and that led to his album The Stories of Your Life. One powerful story was submitted by a lady named Renee, and her story led to the song “Forgiveness,” which was saved for West’s next album.

Renee recounted how a drunk driver killed her teenage daughter and her daughter’s best friend in a car accident. Anyone would understand if Renee chose to respond in anger, bitterness, or hatred, but instead she chose forgiveness. The drunk driver was convicted and sentenced, but eventually Renee and her family petitioned the judge for his early release. The man has turned his life around through the power of forgiveness, and today is a believer in Jesus.

Here are the lyrics to the song that inspired the book:

Help me now to do the impossible
Forgiveness

It’ll clear the bitterness away
It can even set a prisoner free
There is no end to what it’s power can do
So, let it go and be amazed
By what you see through eyes of grace
The prisoner that it really frees is you

Posted by Tommy Mann Ministries at 10:45 AM