Bats and Birds in the Bible 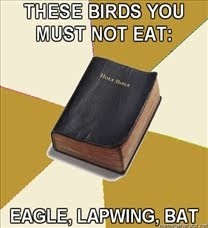 One of the supposed errors in the Bible that atheists are trained to use against Christians is that the Bible wrongly refers to birds as bats.

This is one of those assumed discrepancies that are used to discredit the Bible. If the Bible is wrong about a bat, they argue, then we can reject what it says about homosexuality, hell, Creation, Calvary, or whatever else they are trying to oppose.

Here are the verses in question:

People rightly point out that the bat is a mammal and not a bird. Therefore, they conclude, that the Bible is wrong.

But please let me point out two things, one obvious, and the other not so obvious.

The obvious: these passages were written in Hebrew 4,000 years ago, translated into Greek a few thousand years later, and translated into English a few hundred years ago. The system we have today of classifying living things—the Linnaean Classification—was first published in 1735, and his breakdown of animal classes to include mammals and birds was published in 1758. There were ten editions to his classification in a 23-year period.

In other words, when the Bible was written in Hebrew, translated into Greek, and being translated into English, there was no distinction between a mammal and a bird; the word mammal didn’t even exist, and Linnaean’s ever-changing book was not exactly settled science.

So to announce today that the Bible was wrong for not using a word that would not exist for a few thousand years is quite foolish.

And now the not so obvious. In addition to the point stated above, the Hebrew word we translate as bird or fowl is owph, which means owner of a wing. A person in 2015 hears the word bird and thinks of a biological classification, but the ancient word in the Bible refers to anything with a wing.

Bats have wings. Therefore, by using the word owph to refer to anything with wings, the Bible was correct.

So when the atheist gives his condescending chuckle about the Bible not understanding science, he is proving to be the one in ignorance.
Posted by Tommy Mann Ministries at 10:17 AM