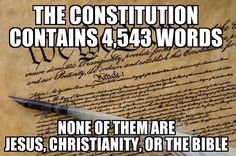 That's correct, the Constitution does not use those words.

But the preamble to the Declaration of Independence states, "We hold these truths to be self-evident, that all men are created equal, that they are endowed by their Creator with certain inalienable rights…"

These truths (that we were created by a Higher Power, not evolved by random chance) are self-evident. That means that this was the commonly-accepted belief (and is still common sense today). When something is commonly believed by the vast majority, the Constitution would not need to contain those words.

This is like saying that the menu at McDonald's never uses the words hungry or thirsty. That is presupposed before someone goes to a restaurant.

Furthermore, the First Amendment to the Constitution states, "Congress shall make no law respecting an establishment of religion, or prohibiting the free exercise thereof."The Constitution was written with an understanding that God is the Creator, and Congress should never butt in and prohibit the daily living out of that belief.
Posted by Tommy Mann Ministries at 2:19 PM