Jesus Did Not Condemn the World 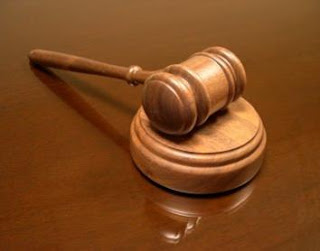 According to John 3:17, God did not send His Son Jesus into the world to condemn the world. This verse has led many people to develop a theology that says that Jesus is not a condemning God, and this belief is used to help build their case that Jesus is all love and no judgment.

The problem with this theology is that the reason Jesus was not sent to condemn the world is that world ALREADY was condemned. John 3:18 continues and says, “He that believeth on Him is not condemned, but he that believeth not is condemned already.”

Ever since the first sin in the Garden of Eden mankind has been condemned because of our sin nature. We are all condemned from birth, so Jesus did not come to condemn mankind, but to redeem us!

Jesus’ own mission statement says that He came to “seek and to save that which was lost (Luke 19:10).” He did not come to condemn, but to save us from our own condemnation. This is great news.

This means that all of us who claim to follow Jesus should be picking up where Jesus left off on earth: seeking the lost, and leading them to Jesus. Why? Because the way they are they are already condemned.

So if we take John 3:17 to simply mean that Jesus did not come to condemn anybody, it can come across as if there is no need to worry about being condemned. This is very wrong. People may call you judgmental, but that is a small price to pay to potentially bring a person who is condemned into a relationship with Jesus.

Even though Jesus did not condemn the world, He will judge the world, and many will be sent to hell after He judges them because they condemned themselves with their unbelief. Let’s tell them before it is too late. If we don’t, we are assisting in their condemnation.

Jesus did not condemn the world. Are you condemning it?
Posted by Tommy Mann Ministries at 3:01 PM No comments:

A tightrope walker only has one necessary skill: balance. Move an inch to the left, or overcompensate two inches to the right, and he is finished for sure. Recently it has occurred to me just how much of a balancing act Christians need as well. 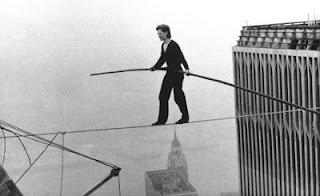 I am not talking about walking right down the middle. Absolutely not. We need to stand up for what we believe in, no matter how politically incorrect we might be. The last thing we need to worry about is being people pleasers.

The balance that we need as Christian is to avoid going to extremes on most issues. Now, if something is black and white in Scripture, than do no make it gray. But other things require good balance.

For example, take prayer. The Bible is full of verses that tell us that we will receive what we ask for if we do it with enough faith, or in the name of Jesus. But there are also verses that say to ask for God’s will to be done instead of our own. This has caused some Christian groups to believe that God will answer “Yes” to every single prayer, and if He doesn’t, you didn’t have enough faith. Other groups will never “let their requests be made unto God” because they don’t want to pray for their will to be done. We need a balancing act. We cannot take one verse of Scripture about prayer and ignore all the others. Find that balance between asking in faith while yielding to God’s will.

Another example is one that has led 21st Century Christians groups to each have their own Jesus. One group has the Jesus of love and the other has the Jesus of wrath. Jesus is not all love and no wrath, but neither is He all wrath and no love. Guess what? He is actually found right in the middle, doing His own balancing act. In His sovereignty, God will never tip the scale one way or the other. God is love, and His love requires Him to exercise His wrath. God is 100% love and 100% wrath at the same time.

One final example. In John 15 Jesus said that He called His disciples, not servants, but friends. What a great thought! But in John’s Revelation, Jesus spoke His own name and John fell down like he was dead. My grandparents’ generation seemed to have been more on the side of John, while this new generation prefers to focus on John 15. This has led one group to go overboard and, in a blasphemous manner, announce that Jesus is their homeboy. The other group is guilty of making Jesus a million mile away God. What do we do? We find a balance. Remember, the apostle John recorded both occasions, so he certainly knew where the balance was.

So how do we find the balance? We ask God for help. The closer we get to God the more we will know Him. As we get to know God more we will know where to find that balance. It is not an arrogant statement to say that we know God. We should get closer to Him each day. Here is how:

The truth of God is not up for debate or left up to us to make Him who we want Him to be. We must properly know who God is.

Witnessing Tips from a Thief 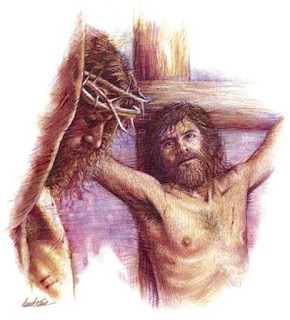 In honor of the Easter season I thought it would be a good idea to look at the thief on the cross next to Jesus at the Crucifixion. Jesus gave His disciples, and us today, the charge to tell people about Him (which we call “witnessing”), and I believe we can learn a thing or two from this thief.

First, we see that Jesus had two converts while He was dying. One of the Roman solders who was working the executions that day was forced to conclude that “truly this man was the Son of God (Mark 15:39).” And then there is the thief who was crucified next to Jesus. We see his prayer of salvation: “Lord, remember me when you come into your kingdom (Luke 23:43).” While Jesus was dying he had more converts to Christianity than most Christians will have in their lives. This is a great reminder to us as Christians that we should always be mindful of the unsaved people around us, and their eternal destination if we do not tell them about Jesus.

Another thing we can learn is the importance of planting a seed. This is not gardening talk, but more Christian terminology. We might tell somebody about Jesus, only to have them reject the message, but this is not a total loss. It plants a seed that might be cultivated over time and still lead to that person’s changed life.

That thief on the cross next to Jesus clearly had a seed planted in his heart before he was crucified. How else could he have come to his conclusion about who Jesus was when Jesus barely spoke that day? The thief obviously knew the Scriptures, and that there were prophecies that the Son of God would come to take away the sins of the world, and then later establish a kingdom. He knew the Scriptures, and had most likely rejected the idea that this carpenter was the one prophesied about. But that seed that had been planted continued to grow in his heart, and he is in heaven today because of it. Christians, even if you do share your faith but don’t see converts, keep your chin up. You are planting seeds.

We can also learn that, while Bible knowledge is important, that is not what brings salvation. The thief did not ask to go to paradise with Jesus, but that is where he went that day. He thought he would immediately become part of some new kingdom on earth, but that kingdom will not become literal until after the Great Tribulation. The point is this: you might not know the ends and outs of the book of Revelation, you might be totally confused on issues of free will or election, and you might have no clue what “propitiation” or “substitutionary atonement” are, and that’s OK. While those things are good to know, they are not requirements for your salvation. What are the requirements? Believe that Jesus Christ is the Son of God, and allow that belief to change your life so that you live for Jesus as the Lord of your life.

Finally, we can learn that we can learn from a thief. Yes, this convicted career criminal can teach us sanctified believers a few things. Even though he never told another person that he found the one the Scriptures prophesied about, his final recorded sentence has testified for two thousand years.

May we do the same.
Posted by Tommy Mann Ministries at 4:40 PM 1 comment: