The Name God Calls You 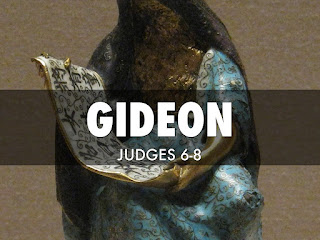 All parents have instructed their children not to call people names. And I imagine that all parents have had their kids come tell on another kid: “He called me a name!” Although it might not be expressly said, it is implied that we mean not to call someone a negative name. When children call each other things like dumb or weird, it obviously hurts that child’s feelings and makes them think they are disliked or inferior. If that child were to be called cool or awesome, it has a completely different effect.

Sometimes God calls people names. For example, Jesus famously called one of his disciples “The Rock” (Peter) when everyone else called him Simon. That nickname inspired Simon to step up to the plate and lead the apostles and the early church. But I want to focus on another name that God called someone. Although his parents named him Gideon, and the Israelites later nicknamed him Jerubbaal, God called him by another name: “And the angel of the Lord appeared to him and said to him, ‘The Lord is with you, O mighty man of valor (Judges 6:12).’”

Mighty man of valor. What member of the male species would not want to be known by such a moniker? From the beginning of time men have gone to great lengths to demonstrate their valor, usually with the intent of getting a lady to notice. But Gideon doesn’t seem to have been one of those guys. An Alpha Male, Gideon was not. In fact, when the Lord appears to him, Gideon is “beating out wheat in the winepress to hide it from the Midianites (v.8).” Wheat was not threshed in a winepress under ordinary circumstances. The process involved using a winnowing fork to throw the piles of wheat and chaff into the air and allowing the wind to drive away the useless chaff, while the heavier wheat fell to the ground. An enclosed winepress would not allow this process to happen easily.

So why was Gideon threshing wheat in a winepress? The text tells us he was hiding his wheat from the Midians. Israel had been oppressed for seven years, and “whenever the Israelites planted crops, the Midianites and the Amalekites and the people of the East would come up against them (v.3)” to steal their produce. Gideon was hiding because he was afraid, and yet God calls him a mighty man of valor. He doesn’t look like a man of valor; he doesn’t even look like a man!

Gideon was not wearing an NRA hat and waving a Don’t Tread on Me flag in his yard. He was quivering in his cave, hoping the bullies wouldn’t see him and take his lunch money. He was not looking to deliver the nation or lead a revolution. He just wanted to gather his wheat and make it safely back home.

Even after God called him a mighty man of valor Gideon chose to carry out his first assignment under the cover of darkness. Then he wanted a sign from God. Then another one. He doesn’t look mighty, and he is fresh out of valor. But one chapter later this converted coward leads an army of 300 to victory over an army of 135,000. Despite being outnumbered 450 to 1, this mighty man of valor steps up to the plate, just like Simon turning into a Rock.

I’m glad that God calls us names. More importantly, I’m glad He calls us by what He knows we can become, not by what we are right now.

Posted by Tommy Mann Ministries at 1:51 PM No comments: