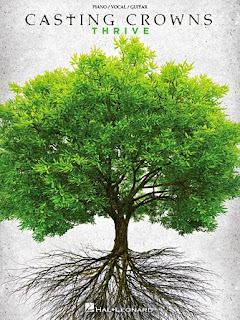 The popular Christian group Casting Crowns has recently released a song titled Broken Together. I really like the song, but at the same time it leaves me a little disappointed.

I am a big Casting Crowns fan, although they do have a tendency to come across as pretty negative from time to time. Broken Together is a beautiful song, both vocally and musically. The song is written to husbands and wives who entered marriage expecting a fairy tale, only to find out that their partner isn’t as perfect as the one in the chick flick.

The chorus says, “Maybe you and I were never meant to be complete.
Could we just be broken together?
If you could bring your shattered dreams and I’ll bring mine
Could healing still be spoken and save us?
The only way to last forever is broken together.”

I agree with the song’s premise that marriage isn’t always a fairy tale because it unites two imperfect people, so imperfection remains the result. We need to be honest about our own shortcomings and not just focus on our spouse.

I realize that embracing brokenness has become one of the battle cries of the emerging church—“We are all just beautiful broken messes!” But what is really beautiful is marriage itself, the God-ordained joining of two people in holy matrimony, symbolic of the covenant between Yahweh and mankind.

The problem of settling for broken together (the only way to last forever?) and celebrating brokenness in general is just that—it is settling. Jesus didn’t die on the cross so that we could embrace brokenness, but new, abundant life in Him (John 10:10). If anything is broken, it is the chains of sin and the old way of life that died at our conversion.

I will not boast in brokenness, but in being a blood-bought, set apart saint viewed as righteous in the eyes of my Father. This is not bragging in myself, but only in the work of Christ, who exchanged my sin (brokenness) for His righteousness (1 Corinthians 1:30-31).

Paul felt the same way. Writing to the Corinthian Christians who had once practiced the vilest of immorality, the Apostle said:

“Do not be deceived: neither the sexually immoral, nor idolaters, nor adulterers, nor men who practice homosexuality, nor thieves, nor the greedy, nor drunkards, nor revilers, nor swindlers will inherit the kingdom of God. And such were some of you. But you were washed, you were sanctified, you were justified in the name of the Lord Jesus Christ and by the Spirit of our God.”

Paul didn’t celebrate their brokenness and say, “God understands that no one is perfect. You are all just broken people, so do your best, be broken together, and you can still go to heaven.”

Paul said they were washed, sanctified, and redeemed. Doesn’t that sound better than broken? I can hear the critics screaming about self-righteousness, but Paul didn’t give them the credit; the change was made by “the name of the Lord Jesus Christ and by the Spirit of our God.” To Him be the glory!

We serve a God who opened the eyes of the blind, healed the sick, raised the dead, and has the power to forgive sins. Can’t He do better than broken?

The only was to last forever is being together, united with Christ in salvation. That is certainly better than broken.
Posted by Tommy Mann Ministries at 10:57 AM No comments: