Hillary: Unborn Persons Have No Rights 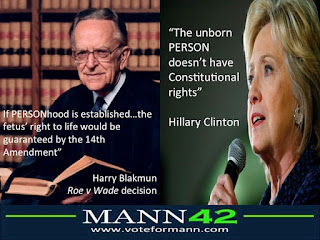 Hillary Clinton made a shocking admission on NBC’s Meet the Press.  When speaking of the unborn, she said, “The unborn person does not have Constitutional rights.” She went on to add that no laws or practices include, “sacrificing the mother’s right to make decisions.”

This is a major statement because abortion rights groups refuse to use any words that will “humanize the fetus,” and person is about as human as it gets. “Person” has become a legal word, not merely referring to homo sapiens, but to those human beings who are entitled to Constitutional rights.

Clinton’s comments served as an oxymoron; one cannot be both a person and not entitled to Constitutional rights.

As science has begun to definitively prove that the “fetus” is very much alive inside the womb, abortion activists have had to alter their approach. Many no longer insist that the fetus is just a “clump of cells,” but argue instead against personhood. Hillary’s husband, former President Bill Clinton, conceded as much in his memoirs, noting that the unborn child is alive, but not entitled to personhood status.

This personhood debate goes all the way back to Roe v Wade, where Justice Harry Blackmun wrote in the majority opinion:

“If this suggestion of personhood is established, the appellant’s case, of course, collapses, for the fetus’ right to life would then be guaranteed specifically by the [14th] Amendment.”

The 14th Amendment is what guarantees all Americans have the right to life, liberty, and the pursuit of happiness.

Hillary Clinton made the jump from fetus to person; from human with no rights to person with full rights. As she stuttered and stammered through her answer, she finally noted that we can’t sacrifice the mother’s right to make decisions. By the benign word decision, she was referring to severing the bodies of these unborn persons.

But Justice Blackmun also addressed the concern of the mother’s rights. Conceding that at some point in time we must consider the rights of the unborn, he wrote, “Another interest—that of potential human life—becomes significantly involved. The woman’s [right to] privacy is no longer sole, and any right of privacy she possesses must be measured accordingly.”

The Justice’s point was clear: the mother’s rights are sole, unless we can establish personhood. Hillary (and science) has established personhood. It is time to reverse Roe and protect our tiniest persons.
Posted by Tommy Mann Ministries at 2:13 PM No comments: