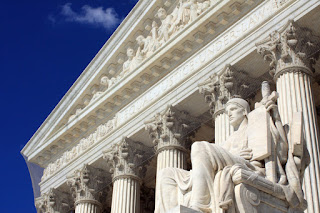 If you watched the debates or have listened to the news recently, you probably heard questions posed to Joe Biden and Kamala Harris about whether or not they would pack the court if they were elected. I have gotten the feeling that many people do not really understand what that phrase means, so I wanted to discuss it.

First, let me remind you that I try very hard to refrain from weighing in on political matters. As a pastor, there is a fine line between speaking about issues of morality and endorsing parties or candidates. With the exception of the time when I ran for office myself, I have never publicly endorsed a candidate, and I am not doing that now. Please do not hear this as pro-Trump, pro-RNC, or even anti-Biden/Harris or DNC. This is simply an attempt to explain what packing the court is, and why this should be a major issue.

Because the media has been accusing Trump of trying to “pack the court” by nominating Amy Coney Barrett, many may be left with the conclusion that Biden packing the court would just refer to him having the opportunity to replace a Supreme Court justice if elected. That is not the case.

Packing the court refers to adding seats to the Supreme Court. Because the Constitution does not set a number of seats on the bench, Congress has full control over that number. In 1837 Congress added two seats, allowing President Andrew Jackson to nominate two justices. At the conclusion of the Civil War, Congress reduced the number back to seven, and only three years later returned the Court to nine, allowing President Ulysses S. Grant to add two justices. Since 1869–more than 150 years—the number of justices has been frozen at nine.

The only attempt to pack the court was in 1937 by President FDR, who was himself very socialistic. What was his reason for trying to pack the Court? They handed down a unanimous decision against FDR. Because he could not get his agenda through the current Court, his plan was to add enough extra judges—at his choosing—that would legislate from the bench and green light his socialist agenda. What happened to his court packing scheme? The Democrat controlled Senate—his own party—shut him down.

Enter the 2020 race and the discussions involving SCOTUS. I understand the Democrats’ frustration that President Obama’s nominee was not confirmed by the Republican Senate, the very Senate now set to confirm President Trump’s. The reality is, the same Constitution that vaguely says Congress shall establish “one supreme Court” also vaguely says, “and [the President] shall nominate, and by and with the Advice and Consent of the Senate, shall appoint Ambassadors, other public Ministers and Consuls, Judges of the supreme Court, and…” The Appointments Clause, as it is called, mandates that the President nominate a person; both Obama and Trump did that. It also says the Senate gives advice and consent. The President has a mandate to nominate; the Senate gets to decide if they choose to consent. While the Republicans certainly played politics with the Merrick Garland nomination in 2016, they acted within the accepted interpretation of the Constitution.

That is a bitter pill to swallow for many Democrats. Their solution, then, is to make up for the perceived injustice by changing the rules and packing the court.

Both Biden and Harris were asked multiple times whether or not they would pack the courts, and they refused to answer one way or the other. There is a difference between a dodge and a refusal to answer, and they refused to answer. The only logical inference for voters is to decide that they fully intend to pack the court; they know their base wants them to, but they also know how that should terrify Americans, regardless of party. Ergo, they refuse to answer because it will hurt their chances of winning.

Why does this matter? The results would be monumental.

I keep hearing the number of justices Biden would add would be six, taking the number to fifteen. If one President gets to add six justices for no reason other than changing the rules in protest, the separation of powers would be forever decimated in this country. There would be no difference between the three branches of government. To pack the court Biden would need his party to take the Senate; that would mean they would control the Executive and Legislative Branches; after packing the Court, they would also hold the Judicial Branch. Here is the problem: Biden could tell Congress to pass a law, and once they do, the Court would affirm the law as written. This is how tyranny works.

This is hypothetical and extreme, but imagine Biden wants to make it illegal to own a Bible. Congress writes the bill, and he signs it. That violates our first amendment., but to whom do we appeal? If Biden has packed the court with activist, radical judges, they will gladly side with him. The job of the court is to act as the final check on the other branches. If an executive order or piece of legislation violates the Constitution, the court strikes it down. Biden essentially wants to create a court that will rubber stamp his radical agenda.

That is exactly what FDR tried to do. The court unanimously told him he was violating the Constitution, so he tried to pack it with robed radicals that would pass whatever he wanted.

Now think about what we know about the Biden/Harris ticket. When she was running for President herself, Harris said she favored a mandatory gun buyback program, in clear violation of the second amendment (https://www.bloomberg.com/news/articles/2019-09-06/kamala-harris-supports-mandatory-buyback-of-assault-weapons?fbclid=IwAR0OIE1qw4GwaxAw5II4LxM6ccU_06S3290Y-AWYt_QENx-nXQVmvaaWu2Y).

She also said she favors repealing a statute that criminalizes illegal border crossings, essentially making us a country without borders (https://www.politico.com/2020-election/candidates-views-on-the-issues/immigration-reform/illegal-entry/?fbclid=IwAR2kcKrKbpqWbdzoZkn27AeI_OT_hDOZeQs4YH4Q_XZdQP1YK2MQukihdes). Those articles are from Bloomberg and Politico, liberal organizations.

Even if Biden and Harris do not have any sinister plans to change the country, packing the court with radicals is still dangerous. Since COVID, Governor Gavin Newsom of California has cracked down on churches. He has allowed large protests, including riots and looting, but has banned many church gatherings, and banned singing in churches that are small enough to meet. Several pastors have faced legal repercussions for meeting in defiance of Newsom. Governor Chris Cuomo of New York told Jews in his state, “If you are not willing to live with these rules, I will have to close the synagogues…You are right on the line of government intrusion.” (https://www.jewishpress.com/news/jewish-news/cuomo-threatens-to-shutter-synagogues-ahead-of-meeting-with-chassidim-on-covid-spike/2020/10/06/)

Never in America did we think people of faith would be threatened and punished by their governors just for going to church. These draconian lockdowns will almost certainly reach the Supreme Court if they continue. It is not too unrealistic to think that in a few years a packed court could be ruling on whether or not Bibles can be read, or if pastors can preach certain passages, or if people can own guns, or if we can have a free press, or if we are allowed to criticize or disagree with our leaders. The radicals that Biden would pack the court with would strip away our fundamental rights.

There are two types of judges: those that adhere to the Constitution as written (conservative), and those that view the document as in flux, changing with whatever is current or trendy (liberal). The conservatives, called strict constructionists or originalists, vote in favor of what is written in the Constitution. The loose constructionists often vote in favor of what they wish was written in the Constitution. They typically “legislate from the bench,” creating laws where there are none, instead of letting the Legislative Branch write them. For years Democrats have relied on the courts to enact laws that they cannot pass through Congress or win with at the ballot box. The ruling on gay marriage is a prime example. Five justices invented a law not found in the Constitution. Strict constructionists would have put the onus on the Legislative Branch to write a law, but they didn’t. Now we say gay marriage is the law of the land, when in reality, the Supreme Court did not even write a law (because they can’t). Take my state of South Carolina for example. If gay marriage was on the ballot here, it would never pass. Radical liberals rely on the Court to do what they cannot do at the ballot box. That is why they want to pack the Court.

Because votes matter and elections have consequences, people can choose the candidates they want to nominate and confirm the kind of justices they want. If people choose radicals because they want radical justices, fine. My fear is that people think they are getting a moderate with Joe Biden, who will in turn pack the court with radical, activist, loose constructionists.

Again, this is not a pro-Trump post. If you don’t like him, don’t vote for him. There are four names on the ballot, and writing in a name is an option as well. But I would strongly caution anyone not to vote for Biden until he is willing to say that he will not pack the court (or end the filibuster; another question he refused to answer). Our country can survive four years of any President; we have been doing that for 250 years. But lifetime appointments to the highest court in the land would fundamentally change this country, which is a phrase radicals like to use.

Posted by Tommy Mann Ministries at 2:53 PM No comments: