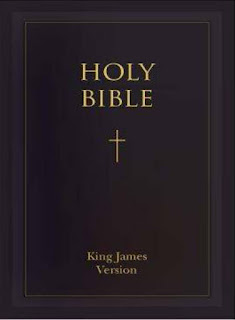 Bringing your Bible to church is becoming a lost art. Do we really need our Bibles at church?

Imagine that I invited you over to my house for a dinner that I prepared. After the main course I pull out the recipe and begin to read you all the ingredients; it all sounds good until I get to the last one: rat poison.

The only one of us that knows the truth is the one who is holding the recipe.

And when we are listening to a sermon, the only ones who know the truth are the ones who can follow along in their Bible. In many cases the preacher is the only one with a Bible, and is therefore the one who posses all access to truth.

But wait! His text is on the projector screen. Which was typed by a person. Possibly the preacher himself.

I’m not saying that he his trying to deceive anybody, but he is human and capable of making mistakes. Misspeaking. Misspelling. Mistyping. Misapplication.

The best way to guard against this is to bring your own copy of the Word of God (hopefully the one you are reading all through the week, not leaving behind to save your seat).

In Acts 17:11 Paul admonished the Berean believers for searching the Scriptures daily to see if what Paul and Silas taught them was true. Because of this, Paul said they were more noble than the Christians in Thessalonica.

We clearly have a biblical precedent for following along and making sure the doctrine we receive is sound doctrine. Over the years I have heard people in leadership roles make claims that the Bible clearly refuted:

* Jesus only died for certain people, but John 3:16 said that He died for “the world” and that “whosoever” believes can be saved.
* The earth was created by a big bang, but Genesis 1:1 and John 1:3 both say that God created all things.
* Hell is not a real place of suffering, but Luke 16:23 shows a man in hell who was “tormented” in the flames.
* There is a line we can cross where Jesus will no longer forgive our sins, but 1 John 1:9 says that God will be faithful to forgive all sin that we confess.

In the early days of the Catholic church, before printing presses, English Bibles, and literacy, a single Latin Bible would be chained to a pulpit in each church. People didn’t have their own Bibles, they couldn’t read, and they didn’t speak Latin; therefore, the priests could tell the laity that the Bible said whatever the priests wanted it to say.

After the invention of the printing press and the English Bible, people began to see that a lot of what the priests had taught them were absent from the pages of the Bible. That is when the priests began to teach that they were enlightened and the only ones who could understand the truth.

This abuse of power is what led to heretical ideas like indulgences, excommunication, purgatory, the office of the pope, and the idea of an elevated priesthood over laity.

Absolute power corrupts absolutely, and without checks and balances evil men will rise to power and manipulate the truth for their own gain. This was clearly never God’s intention. As Christians we have the duty to protect sound doctrine. We are not Kool-Aid drinking cult members who blindly follow our leaders, but are Spirit-led sons and daughters of God who can have a personal relationship with Him.

In these last days more and more false prophets will become deceivers, and if we stay in tune with the letter that God has given, we can continue to know the truth, and the truth will set us free.

So make sure you are hiding God’s Word in your heart, and bringing it with you to church. You won’t fall for it if someone tries to excommunicate you.
Posted by Tommy Mann Ministries at 12:43 PM 2 comments: