This was an article I wrote for the Union County News. 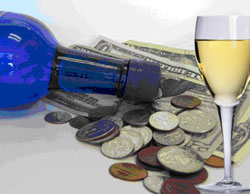 I have heard some talk lately about the possibility that our county will increase alcohol sales to raise revenue. In this economy we should certainly explore options that might increase revenue, but are we willing to compromise our standards to do it?

The state of Minnesota recently contemplated the same issue. Just last year the state put out a fact sheet to see how much revenue was brought in through the sale of alcohol, and it was a staggering $296 million.

But the interesting part came when they calculated how much the sale of alcohol cost them.

After they calculated the cost on the state from alcohol related homicide/suicide, falling and other accidents, drowning, cancer, liver disease, other chronic illnesses, vehicular accidents, unintended pregnancies, birth defects, and alcohol dependence programs, Minnesota found out that they paid out $5.06 billion because of alcohol sales.

That is 17 times the amount of “revenue” brought in by alcohol.

Increasing our venues that can sell alcohol may bring in money off the top, but it will cost us far more than we want to pay.


Source: http://www.health.state.mn.us/cdrr/alcohol/alcpdf/costfactsheet.pdf
Posted by Tommy Mann Ministries at 11:44 AM No comments:

Is "Heaven is For Real" For Real?

In Todd Burpo’s new book Heaven is For Real he recounts his son Colton’s medical problems, which included an emergency surgery that almost ended his life. According to Burpo, his four year old son later told his father that the angels sang to him during his surgery. From there, the rest of the book is devoted to the father retelling the son’s story of his trip to heaven.

This book was very well written and the story was captivating. Anyone would have to be heartless to accuse this cute toddler of lying or being wrong about what he claims he witnessed. While I am not prepared to accuse him of lying, there were some questions that I have. According to Burpo on page 66, his son’s story “matched Scripture in every detail,” and in order for this story to have been true, it would indeed have to match in every detail.

Colton also told his father that everyone, including his Papa, had wings in heaven. The problem with this, as I describe in greater detail in Asleep in Heaven’s Nursery, is that people do not become angels once they get to heaven. Humans will still be humans in heaven, just with glorified bodies, and angels are separate beings. Matthew 22:30 and Hebrews 12:22-23 both make a distinction between angles and humans (“spirits of just men made perfect”).

Colton slowly shared details with his dad over the course of three years. Among those details were things like Jesus giving Colton homework to do in heaven, which again, doesn’t match Scripture.

Colton said that while he was there he saw Jesus “shoot down power” from heaven in the form of the Holy Spirit to give his father the power to preach. This bit of news came more than a year after Colton started telling his father about his visit to heaven; when his story first started, this visit had taken place while Colton was in surgery and his parents were in the waiting room. His father was certainly not preaching during this time, he was in the waiting room “chastising God” for his son’s illness, so that whole story seems outright false.

Three years after Colton’s surgery, their family was at home watching The Lion, the Witch, and the Wardrobe on DVD. After the movie was over Colton’s mother asked if there were swords in heaven, and Colton told her that there were. He said that the angels carried swords in order to keep Satan out of heaven, and Colton asked if he could have a sword, and Jesus told him no because that would be too dangerous. This makes me wonder how heaven could be dangerous, especially since it is a perfect place where the humans have glorified bodies. Could Jesus not let this child have a sword for a little fun? Could Jesus not keep him safe?

When he told his parents that Jesus wouldn’t let him have a sword, he was “dejected” and “slumped toward the floor.” He was also disappointed earlier when his angel wings weren’t as big as the other angels’ wings. My final concern with this testimony is that I can’t imagine anyone going to heaven and feeling disappointment due to lack of possessions or fun.

The whole story is also fishy because it took three years to get all the details. And those details didn’t start right after he woke up from surgery, like any natural person would expect. The first details about this visit first emerged four months after the surgery. Once he gave these first details, his parents waited a week before they asked him to explain what he was talking about. I don’t know how any parent would wait a week, or even 30 seconds, to ask him for more details.

I’m not accusing anyone of lying, but if Jesus really took this child to heaven, then as his father admitted, every detail would have to match Scripture. If there are extra biblical details then it is a new revelation, which Paul warned us about in Galatians 1:8-9.

In my opinion, Heaven is For Real is not for real. 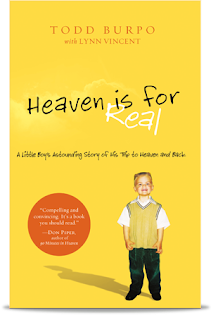 The Voice of the Martyrs founder Richard Wurmbrand wrote about the 14 years he spent in a Communist prison. In his book Tortured for Christ he recalls the night that he and his wife were in attendance at a special congress called by the Communists to discuss Christianity.

Wurmbrand’s wife, Sabina, told him, “Richard, stand up and wash away this shame from the face of Christ. They are spitting in his face.”

What would you have done if you were in his situation? Richard knew the penalty for standing up and speaking out against Communism.

“If I do so, you lose your husband,” he told her. His wife’s reply was, “I do not wish to have a coward as a husband.”

Wurmbrand stood up and began to praise Jesus Christ as the only one we should pledge loyalty to. His speech was broadcast throughout all of Romania. Listen to how he summed up what happened next:

“Afterward I had to pay for this, but it was worthwhile.”

Paying for this consisted of 14 years in prison in which he was beaten without mercy, starved, brainwashed, and faced many other horrors.

This is a book that every American Christian should read. Too often we take our freedom for granted. We can preach the whole Bible, share our faith, pray in Jesus’ name, attend a local church, and buy or download a Bible at almost no cost. These are all luxuries that the persecuted church risks their lives for.

We deny our faith just so that people won’t think we are crazy for not watching TV shows that take God’s name in vain. People who won’t stand up for what they believe now would never stand up before a Communist congress.

Are you willing to be tortured for Christ? 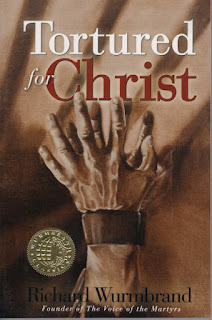