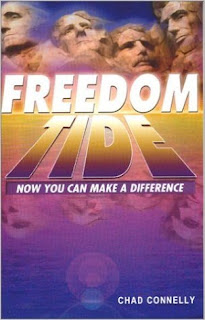 Freedom Tide by Chad Connelly is a book that should be found in the homes of every American family. This short book is to the point, well researched and documented, and written is such plain English that anyone can follow along.

This book establishes the Judeo-Christian values that shaped this country, traces how we have moved away from our moral roots, and beautifully defines and contrasts liberalism versus conservatism. Connelly’s belief in the free market system is made clear throughout his book, which ends with a call to action for the reader.

On our Judeo-Christian founding:

“The Pilgrims started something special in America—with their sacrifices they lit a freedom fire that has burned brightly for over 380 years…People come from all over the world to see what makes our country special. The Pilgrims with their faith and courage lit a little flame that people today will still die to reach.”

“Our Founding Fathers relied on the Bible, early text books quoted the Bible, schools used the Bible to teach the alphabet, the Supreme Court ruled that a school must teach religion and the Bible…their faith permeated everything they did, and they knew that to remove it would invite destruction.”

On the “separation of church and state:”

“Here are some truths for us to ponder: the words, ‘wall,’ ‘separation,’ ‘church,’ or ‘state’ are not found in any of America’s founding documents. In fact, in the months of discussion of the First Amendment in the Constitutional Convention, not one of the ninety founders who participated ever mentioned the phrase, ‘separation of church and state.’ These words ARE found in a document, but the document is Article 124 of the Constitution of the former Soviet Union.”

On the First Amendment:

“Notice there is no reference to what a church or a pastor or a student in school or a school principal shall not do. It refers only to restrictions placed on Congress.”

“I submit that our moral and social decay is linked to our citizens’ indifference and failure to investigate the facts.”

“It sure seems that many people have tried to legislate morality right out of society and those efforts have cost our nation its moral standards.”

On liberalism versus conservatism:

“There is a group of people in America that is concerned with the equality of opportunity. There is another group of people that is concerned with the equality of outcome. I believe that our Founders wanted this to be a land of equal opportunity; they weren’t looking for a handout. Equal opportunity dictates that each person has access to the same tools and the same resources. Each then chooses how hard to work based on how badly they want their goals and dreams. That is fairness. The other group proposes to legislate fairness by identifying people or groups of people who—in its view—don’t have the same opportunity. This group constantly tries to level the playing field so that its outcomes are equal. Traditionally these groups are known as liberal (equality of outcome) and conservative (equality of opportunity).”

On the call to action:

“Each American should look around and remember how blessed we are to live in the greatest country in the world with the greatest form of government in history…Why shouldn’t Americans dream again? Thousands of people have died in the last 225 years for this idea called freedom that gives us the right to pursue our dreams. Why not you? Why not now?”

fReading Freedom Tide will inspire you as a free American to appreciate what you have been given, and to make the most of that opportunity.
Posted by Tommy Mann Ministries at 8:51 AM No comments: