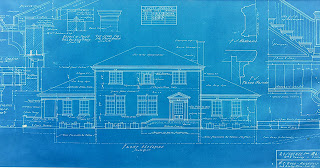 I’m not an architect, but I have seen a few sets of blueprints in my life. I love how incredibly detailed blueprints are, with everything to scale, showing every door and window, and noting the dimensions of each component. A good set of blueprints can let the builders, plumbers, and electricians know exactly what they need to do. If you are unsure, just consult the blueprints.

No, I am not an architect, but I can follow blueprints. Not the trademark blue paper used for sketching plans; I am talking about the pattern of conduct that mature believers should model for younger Christians. In his first letter to the church in Thessalonica (which still exists as Thessaloniki in Greece) Paul commended the congregation for doing exactly that. He wrote:

“And you became imitators of us and of the Lord, for you received the word in much affliction, with the joy of the Holy Spirit, so that you became an example to all the believers in Macedonia and in Achaia (1:6-7).”

The Greek word translated as example literally means an exact reproduction, and it gives us the English word type, as in, “He is the type of person you can trust.” Paul commended the Thessalonians on their conduct; they imitated the example set by Paul, and in so doing they became an example for other churches to follow. Christians in Macedonia and Achaia, which were other cities in Greece, were able to look at the Thessalonians and know how they should conduct themselves. But the blueprint extended beyond their immediate neighbors, because in II Corinthians 8 Paul mentioned the Macedonian churches that pitched in to help the struggling congregation in Corinth. Even though the Thessalonians were in extreme poverty, they still dug deep to help meet the needs of these brothers and sisters in Christ that they had never met.

You don’t have to be an architect, but we all should be working with a good set of blueprints.

Posted by Tommy Mann Ministries at 9:22 AM

Email ThisBlogThis!Share to TwitterShare to FacebookShare to Pinterest
Labels: I Thessalonians, II Corinthians