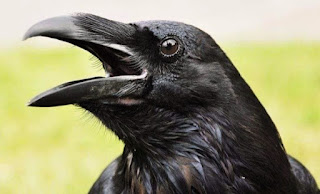 Last week I wrote about eagles’ wings and how we need to wait upon the Lord in order to renew our strength. So can we think about a different bird this week? The raven is not a majestic bird that soars in grace like the eagle. It is actually a scavenger bird, eating the carcasses left behind by nature. Thanks to Poe, the raven has taken on an association with the darker side of literature.

But God has worked through the raven. The fowl served a purpose after the flood, as Noah sent one out that did not return, letting him know it was not yet safe to disembark. But more importantly, God used ravens to help Elijah and to teach him to trust in the Lord. In I Kings 17 the prophet came suddenly onto the scene and told King Ahab that there would be nether rain nor dew for three years.

This was punishment for the idolatry that had become commonplace in Israel’s northern kingdom, but it was also God’s evidence that He was superior to Baal. Ahab’s wife Jezebel had once served her father as the high priestess of Baal, and she was determined to turn Israel into a Baal-worshipping land. Baal was believed to be responsible for sending the rain, so when the land experienced drought for three years, who do you think the people prayed to? They would call upon their god—a mute idol—and beg him to send the rain they so desperately relied on in their farm culture.

Elijah’s declaration of drought would make him a marked man, persona non grata throughout Israel. So the Lord instructed him to go to a private place to lay low while He issued judgment on the idolaters. The text tells us, “The ravens brought him bread and meat in the morning, and bread and meat in the evening; and he drank from the brook (v.6).”

The brook from which he drank was a wadi, a stream that only held water after the rain, but God supernaturally allowed the brook to supply water for an extended period of time in a drought. And Elijah was taken care of by using the first Door Dash service; his meals were brought right to him from the beaks of ravens. And yes, raven are scavengers, but that doesn’t mean they brought him what they eat. One may have brought him fish while another brought him bread. While the idol worshippers prayed to Baal and starved, Elijah was eating fish sandwiches and drinking water from a wadi.

Do you think this strengthened Elijah’s trust in God? Twice a day he witnessed a miracle from the beaks of ravens. In the next chapter he would have the famous confrontation with the prophets of Baal on Mount Carmel, and I believe his experience with the ravens made him up for the challenge.

Never doubt that God can supply your needs. Whether it is manna in the wilderness or meat at a wadi, the Lord can provide for us any way He sees fit. We can mount up with eagles wings and have faith through ravens beaks because our God will never let us down.

Email ThisBlogThis!Share to TwitterShare to FacebookShare to Pinterest
Labels: Elijah, I Kings