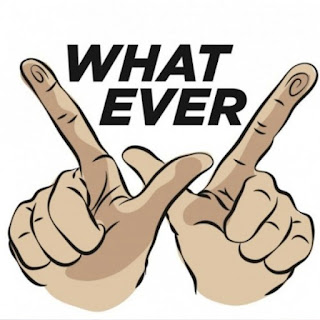 I recently heard that there is an annual survey conducted to determine the most annoying word of the year. For multiple years running (I didn’t catch how many) the people have spoken and deemed “whatever”as the word they least like to hear.

People don’t like this word because it is usually said with a bad attitude. When two people get into an argument and one has run out of things to say, they just sigh loudly and say, “whatever.” It is a word of indifference; rather than thinking of something even remotely clever, we just shrug and utter this tired cop out.

But whatever doesn’t have to be an annoying word. It has the potential to do the opposite; it can lead us to rejoice. It can be freeing rather than frustrating. Consider how Paul used the word.

Many say this word is overused, but the apostle wrote it six times in one verse, and it isn’t one time too many. Instead of using the word in place of thinking, Paul used the word to tell us how to think, or what to think about. Notice that all of the “whatevers” are positive.

If we take Paul’s advice we would be much happier. We have to make a concentrated effort to do this because we are bombarded with whatever the media wants us to consume. We might need to change the radio station, turn off the TV, log off of Facebook, put down the phone, or walk away from the conversation. Protect your mind from whatever gets you down, and saturate it with whatever cheers you up.

The next time you hear someone say whatever, don’t get annoyed. Let it remind you to think on whatever is encouraging.