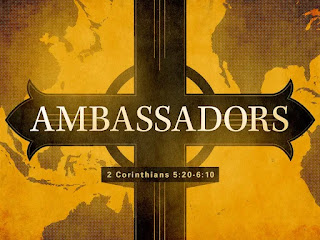 As Christians we serve in an important role, functioning as God’s ambassadors. Paul referred to himself as such in Ephesians 6:20, and then he spoke on behalf of all believers in II Corinthians 5:20 when he wrote, “Therefore, we are ambassadors for Christ, God making his appeal through us. We implore you on behalf of Christ, be reconciled to God.”

The word ambassador comes from a Greek word that means “old man,” as most ambassadors where trusted elders. But in its official capacity an ambassador was one who was sent to represent another, much as our State Department has ambassadors around the world speaking on behalf of the President. These ambassadors served in a foreign land and delivered the messages they were given.

Ambassadors were also common in the Roman Empire. As Rome expanded its empire and took over more territories, they labeled their provinces as being either senatorial or imperial.

The senatorial provinces were not a problem for Rome. These vanquished territories became submissive to the emperor. They laid down their weapons in exchange for peace, and as long as they paid their taxes, they were on good terms with the Roman government. The imperial provinces, on the other hand, were always under the watchful eye of Rome. They had surrendered themselves, but they weren’t exactly submissive. Given the opportunity to rebel, these provinces would have jumped at the chance. To keep rebellions from rising up, the emperor dispatched his ambassadors to keep a presence in those regions.

Because Paul referred to believers as ambassadors, we can think about ourselves as serving in a foreign land; after all, we are strangers and pilgrims passing through earth on our way to heaven (Hebrews 11:13), and our Lord’s kingdom is not of this world (John 18:36). Since we are sent as ambassadors, we can surmise that this world is an imperial province, a hostile territory that is in rebellion against our Leader. The role of the ambassador is to represent someone else and speak that person’s message. We are called to reflect the character of God in our everyday lives, serving as visual representations of the one who sent us.

And we have been called to deliver a message. That is why Paul said God is “making His appeal through us.” Jesus told the disciples that He was calling them as witnesses to testify to the things they had heard and seen (Matthew 28:18-20). Unlike the Roman ambassadors of yesteryear, we come on behalf of a benevolent King. Our purpose is to tell the world that there is a God who loves them and sent His Son to make a way for them to be adopted into His family.

The final things Paul said is that our message is to implore the world to be reconciled to God. Citizens of this imperial province are at odds with God, but through Jesus, they can be reconciled. The relationship can be rectified, and their souls can be saved. Will you accept your post as an Ambassador for Almighty God?