The Conqueror of Hell 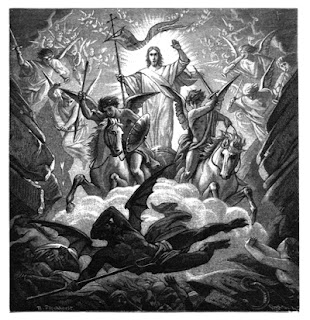 We all know that Satan is a liar; Jesus called him the father of lies and said dishonesty is his native language. But if the devil would tell the truth for once in his miserable life, I like to imagine how he might describe his feelings when he saw Jesus die and come back to life. I think he would say something like this:

The first time I challenged God I planned it out in my mind,

I would ascend to heaven, I would be like the Most High.

But my mutiny was thwarted, to the earth I was cast down,

Rather than a throne room I now scheme from this old ground.

The second time I challenged God I targeted Adam and Eve.

If I could get them to turn on Him then we’d be thick as thieves.

I got them to eat the fruit and I thought that they’d drop dead,

And even though they were punished, God promised to crush my head.

I’d turn them to idols and they’d repent, then I turn them back again.

Then Jesus came to earth in the form of a little baby,

I had Herod try to wipe Him out but his parents fled to safety.

My next unsuccessful challenge was a wilderness temptation,

If He would sin, just this once, He couldn’t bring salvation.

Then I had an idea: I’d have His people kill Him for me.

He could be killed under Jewish law for the crime of blasphemy.

I got Him sentence and condemned, and then nailed to a cross,

They put His lifeless body in a tomb. God had finally lost!

His soul went down to paradise, where they received Him like a King!

Didn’t they know that I had won? I couldn’t believe what I had seen.

Then on the third day, just as quickly as He came in,

I watched in horror as this murdered man came to life again.

With His resurrection He defeated death and then the grave,

He led the hosts to heaven, proving He is mighty to save.

I thought that God had finally lost, but in truth God finally won,

My fate has now been sealed by the victory of God’s Son.

All who call upon the Lord will go with Him to dwell,

But I have been defeated by the Conqueror of Hell.