The Value of Values 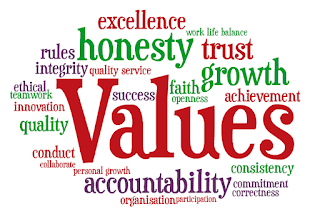 What are your values? I believe that corporations, churches, and even people should have a set of core values. By this I mean there should be some nonnegotiable qualities on which you will not compromise. The makers of Tylenol demonstrated the importance of their company values in 1982.

An accident caused some Tylenol pills to be contaminated with cyanide, which resulted in the unfortunate deaths of seven people. It would be hard for a company to bounce back from a mistake that killed innocent people; after all, how would a customer ever feel safe purchasing the popular pain reliving product again? There are other options on the shelf, so some wondered if Tylenol’s time was up. That is when the company’s chairman James Burke did something unprecedented: he recalled thirty-one million bottles of their extra strength pills, and allowed customers to swap them out for a free bottle that had not been contaminated. This move brought about 100 million dollars in losses. This expensive decision ultimately led to Tylenol regaining the trust of the consumers.

But for Burke this was a no-brainer. The company had a set of values, so not doing the right thing was not an option. He said of the decision that Tylenol has a responsibility to its customers, and “The credo made it very clear at that point exactly what we were all about. It gave me the ammunition I needed to persuade the shareholders and others to spend $100 million on the recall.”

The beauty of having values is that one does not need to wait for a situation to arise, and then sit around trying to figure out if they are going to do the right thing. When a person has itemized their values in advance, decisions become automatic. For Burke, not swapping out the pills was never on the table because his company had among its values putting the customer first.

As Christians we strive to live lives of integrity, and if we make these commitments now, we do not need to wrestle with the decision to do so when the going gets tough. If we value honesty now, then tomorrow we will not entertain lying to get out of trouble. We will not entertain stealing to get something we cannot afford. We will not entertain infidelity in the marriage relationship. If a seducer or seductress comes our way, we will not have time to make a list of the pros and cons, but if we have already determined our values in advance, then there is only one choice, and that is keeping our integrity intact.

Proverbs 19:1 says, “Better is a poor person who walks in his integrity than one who is crooked in speech and is a fool.” James Burke was willing to become poor, but he was determined to do the right thing. If the company went under and he lost everything, he would still have his integrity, and no one can put a price tag on that. We must all learn to value values, so make a list now of things on which you will never compromise.

Posted by Tommy Mann Ministries at 7:58 AM