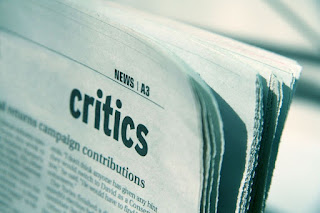 When I was a kid I wanted to be a food critic. I like to eat, and I enjoy a wide variety of foods; plus, getting paid to eat sounded like quite the dream job. Food critics go into restaurants, order several courses, and then give an honest review that can make or break the dining  establishment.

Similarly, movie critics will watch a film and then write their opinions in the paper or online. There are professional critics, and then there are people who are just critical. Some people act as if their occupation is to be a Bible critic. They scoff at any reference to the Word of God, pointing out that it was really just written by men. They say the stories are not true; they claim that creation didn’t happen; they insist that much of the content was borrowed from pagan mythology; and their favorite line is that there are a bunch of contradictions in the Bible.

In a wonderful verse about how the Bible judges our own hearts, the writer of Hebrews gave us these words: “For the word of God is living and active, sharper than any two-edged sword, piercing to the division of soul and of spirit, of joints and of marrow, and discerning the thoughts and intentions of the heart (Hebrews 4:12).”

There is a lot to unpack in that one verse, and I am not even attempting to do it all justice in this space, but I want to point out one word—discerning. That comes from the Greek word kritikos, and as you may have guessed, gives us the English word critic. According to this passage, the Word of God is a critic. More important than critiquing menus and movies, though, the Bible critiques mankind. The sharp, two-edged sword was not the saber swung from mounted cavalry, but the smaller, more precise dagger.

Like a scalpel in the hand of a skilled surgeon, God’s Word is able to cut exactly where it needs to in order to produce the desired results. The soul and spirit are so carefully intertwined that it is hard to differentiate between them, and yet God’s Word pierces so accurately that it can divide them asunder. The Bible penetrates and pierces with precision.

When we as Christians are out of line, God’s Word pricks at our conscience and we feel the stinging rebuke. It knows what we need better than we do, and we would be wise to heed its instruction. Often the ones who are the loudest critics of the Bible are the ones most pierced in conviction, and they are determined to drown out the voice of conviction.

The late J. Vernon McGee once wrote, “We do not sit in judgment over God’s Word, God’s word sits in judgment over us.” That is not to suggest that we cannot probe and study and ask hard questions, but at the end of the day God’s Word is the authority over our lives, not the other way around.

God said it. That settles its, whether we believe it or not. We can critique food and films, but when it comes to the Bible, lets just trust and obey.

Posted by Tommy Mann Ministries at 9:59 AM