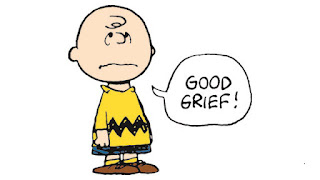 Many of us remember Lucy, the snarky character created by Charles Schultz for his Peanuts comic strip. Whether reading the comic in the “funny pages,” or watching the classic holiday cartoons, we commonly see Lucy roll her eyes in exasperation as she repeats her famous catchphrase (she is also fond of calling him a blockhead). Have you ever wondered what the phrase good grief means? More than just an alliterated anecdote, I believe there is such a thing as good grief.

Earlier in this chapter the apostle mentioned a previous letter he sent to the Christians in Corinth, and after he sent the letter, he sat and worried about their reaction. Was he too harsh calling out their sin? Would they get angry and hate him? Or would they take his message to heart and repent of their sins? The waiting was killing him; the mean time was mean to him. So Paul abandoned the rendezvous point in Troas, and began walking to Macedonia in hopes to find Titus even sooner, and there he would learn how they received his letter. When he found Titus, Paul was thrilled to hear that the church took his message to heart and repented of their sins. Paul’s words caused them grief, but it was a good grief—a godly grief.

The Jewish New Testament translates the phrase godly grief as, “Sorrow in accordance with God’s will.” Sometimes it is God’s will that we suffer, if that suffering is the catalyst that leads to change. We often refer to this as having our toes stepped on. It stings for a minute, but it shows us that we need to move.

Paul had initial regret when sending the letter, but godly grief produced a salvation that freed him from that regret. Good grief is contrasted with worldly grief; the former leads to salvation while the latter leads to death. We see a perfect illustration of this on the night that Jesus was arrested. Peter felt incredible grief for denying Jesus, not once, but three times. That grief led him to repentance, and soon he would lead the church after Pentecost. Judas Iscariot also felt great grief for betraying Jesus with a kiss. He returned the silver, but he didn’t repent. He took his own life, and it would have been better for him that he was never born (Mark 14:21).

Peter’s good grief led to salvation, while Judas’ worldly grief led to death. Maybe you need a little good grief today. Christian, have you allowed a sinful habit to creep back into your life? Maybe the guilt you feel right now is in accordance with God’s will, a godly sorrow that can lead to your repentance. Maybe you have never called on the name of Jesus; godly grief can lead to salvation if you will put your trust in Him. Sometimes, like Charlie Brown, we can all use a little good grief. Don’t be a blockhead. Repent of your sins before it is too late.