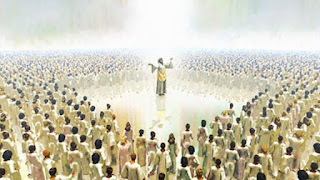 Dr. King famously dreamed of a world in which people were judged by the content of their character rather than by the color of their skin. But never did he dream that we would become a colorblind society. The goal is not to pretend that there are no differences in skin color, but simply not to treat people differently because of those differences.

John the Apostle also had a dream, and he recorded it for us as the last book of the Bible. Revelation 7:9 says in part, “After this I looked, and behold, a great multitude that no one could number, from every nation, from all tribes and peoples and languages, standing before the throne and before the Lamb…”

In his book titled Advocates, Pastor Dhati Lewis wrote about that passage, noting, “Even at the heavenly worship service, God still recognizes different ethnicities.  John didn’t see a multitude ‘who used to be from every nation, tribe, people, and language…’”  (emphasis added)

We are not going to lose our identity in heaven, therefore we can conclude that our identity now is not something we should seek to change. I do not believe there is any difference between people of different races, for there is neither Jew nor Greek (Galatians 3:28).

This means we should reject any and all forms of racism. If we are all going to worship together up there, we should be able to do so down here. The great multitude that John described does not seem to be segregated, but integrated. People from every color will gather together in a beautiful mosaic, demonstrating that Christ died for the red and yellow, black and white, and we are all precious in His sight.

How can all these ethnicities exist in such unity? History has proven that mankind has a terrible track record in this regard, but the people of God are better than that. John’s great multitude is united around a common theme—the holiness of God. They are “crying out with a loud voice, ‘Salvation belongs to our God who sits on the throne, and to the Lamb (v.10)!’”

We are not called to uniformity. In Christ we can celebrate our differences while embracing that which unites us, and that is our common salvation through our Savior. As the church of Jesus, let us lead the way in showing the world our love for each other.