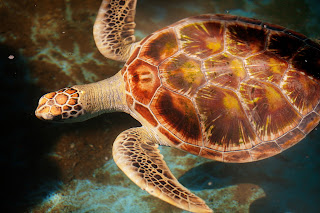 Pastor Steve Gaines once repeated a story he heard from his friend. This man was by himself doing some bass fishing when he suddenly had a sharp tug on his line. He became excited and began to reel in his catch.

After some struggle, he was finally able to discover what it was that bit his hook—not a bass, but a turtle. He laid the reptile on its back in the grass and tried to remove the hook. He even tried giving the back of its head a little thump, hoping to jar the hook loose. He soon realized his efforts were futile, and there was only one option left.

I apologize for the rest of this sentence, but the man took out his knife and removed the head of the turtle, putting it out of its misery. Within minutes he had a new hook on his line and had recast. But then he heard some rustling in the grass behind him, which was alarming since he was by himself. He turned around to see that turtle—headless—trying to walk. Like a snake that refuses to die, this turtle’s nerve endings were causing it to move, and it did what it had always done, repeating the familiar motion of walking.

I’m afraid that decapitated turtle resembles many churchgoers on a typical Sunday morning: there is no life, just going through the motions. We have done it all so many times that it becomes routine. We stand up, sing, sit down. Stand up, shake hands, sing, sit down. Say amen, stand up, walk out. Do it again next week.

We can be dead and not even know it. Like headless turtles, we can walk through the grass but have no destination. The solution is not to stop attending on Sundays, but to attend with a different outlook. Pray before you go (pray about it all week!). Pray for your pastor, the musicians, the worship leader, the Sunday school teacher. Pray for yourself. Go expecting God to speak to you.

Get excited about going. Remind yourself that you are the Bride of Christ, and that Jesus gave His life to start the church. Adopt the attitude of David, who said in Psalm 122:1, “I was glad when they said to me, ‘Let us go to the house of the LORD!’”

This Sunday, don’t crawl into church like a headless turtle. Arrive alive, and prepare to thrive.